skip to main | skip to sidebar

Last night we watched a great game between EFES and Real Madrid. A tough one that ended up being decided in the last minutes.
Let's take a look at some of the last plays of the game. Real looking for options off a middle screen and EFES defending it:
Real played this middle screen three times in the last two minutes of the game (in their last three set offenses) Sergio Rodríguez and Gustavo Ayón running the ball screen and Real's power forward, Nocioni, filling the corner on the left side, with the other two smalls, Carroll and Llull placed one on each side. 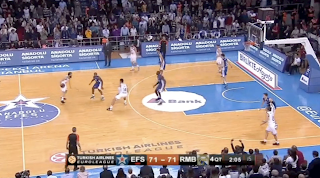 EFES defensive rule was clear: they switched between Ayon and Rodriguez's defenders (Lasme and Draper) and made a rotation with one of the weak side defenders when Ayon rolled to the basket. With that rotation, the mismatch after the pick and roll is not so big (it wasn't Draper, but Perperoglou or Osman taking care of Real's big) Perperoglou and Osman, both of them big enough to avoid a big disadvantage in that mismatch, were aggressive and managed to deny the pass to the big man.
Real played three different options after the pick and roll: pass for Llull (and another ball screen), pass for Nocioni (one on one against Perperoglou), and Rodriguez's one on one against Lasme (which finished with a turnover). Only the second one ended up with the white team scoring. That gave them two points in three possessions, which was not enough to win a close game.
Let's watch it: 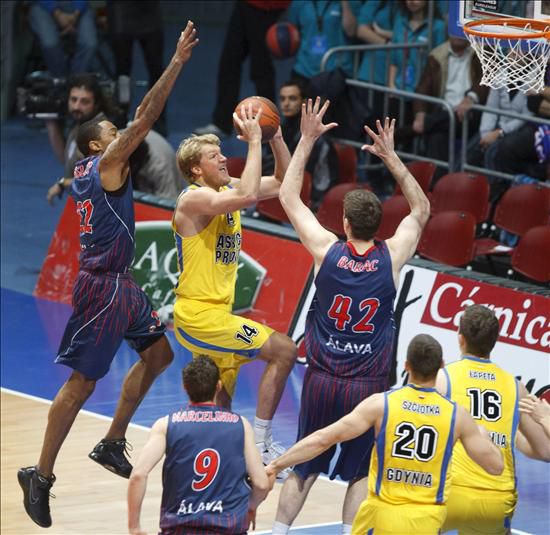 A quick detail from last game between F.C. Barcelona and Real Madrid, to show how a team can read the defense and adapt to get advantages.

FCB know how Real will play ball screen defense, helping/bumping from the opposite side against the screener's roll, we saw it here some time ago, and they are using some moves to punish that kind of defense.
One of the sets they use often is the double high screen, in which, as we can see in the video, both bigs are rolling to the basket, so if the opposite side big's defender helps against the roll or the penetration, there will be a good option to receive the pass inside, or, very important, an advantage for the offensive rebound. 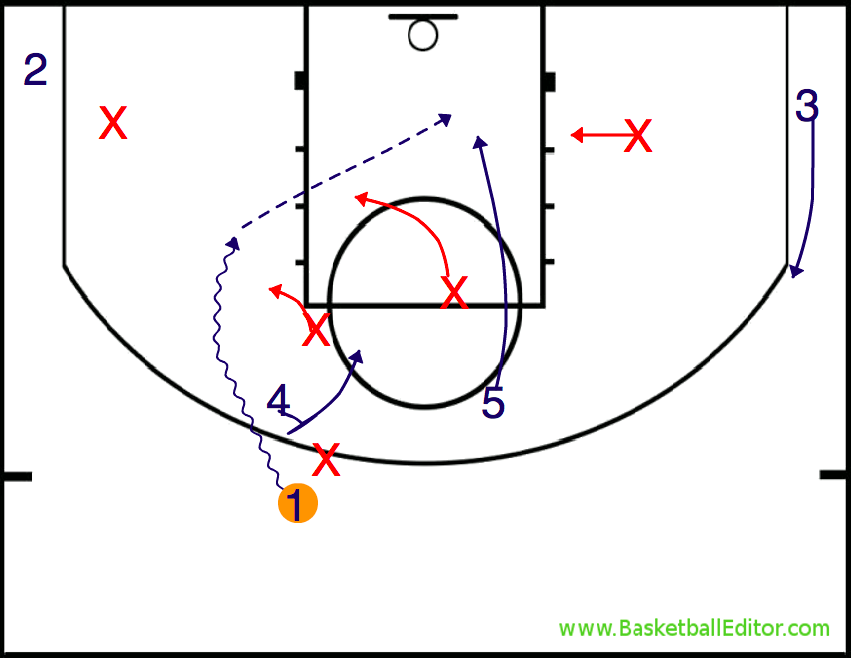 If the last defender helps inside, they will punish this help with the pass to the wide open shooter. 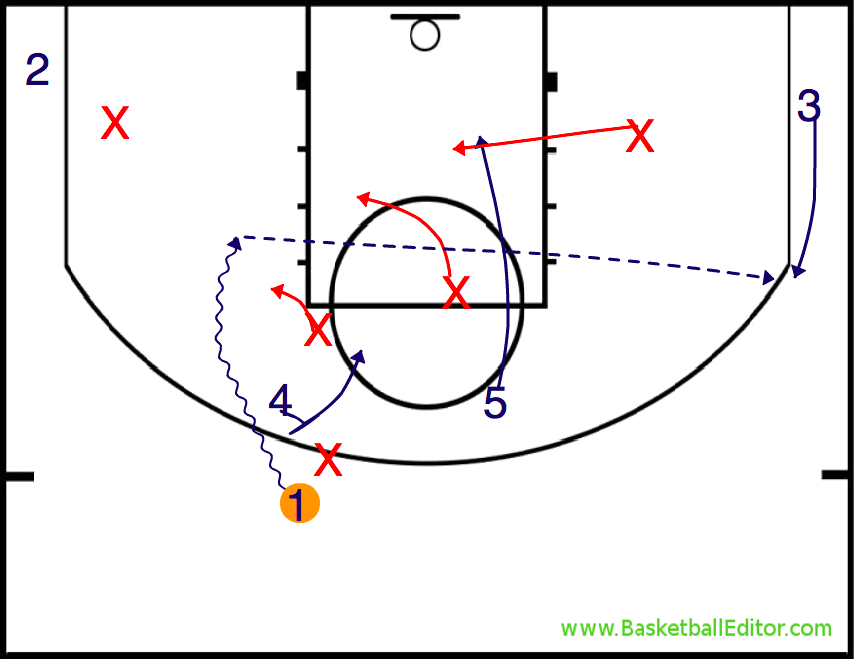 A mismatch situation is often considered a very good option to score. Teams work on the mismatch defense more and more, knowing that it could be the difference between winning or losing a close game. The "inches".

In the F4 semifinal between Maccabi and CSKA we saw how the Israeli team faced a different kind of mismatch, as it wasn't the typical small against big / big against small but instead, an action between two perimeter players, in which one of them has an advantage in the 1x1 situation.

As we see in the video, Ingles is guarding Weems at the end of the first quarter, and Maccabi's reaction is to send David Blu to trap and force a bad decision from CSKA's player. The Russian team seems to be prepared to attack this kind of defense. They spread the court to give room for that one on one, and once Maccabii's player jumps to the trap, they are ready to punish the defense. Khryapa cuts hard to the basket, attracting Pnini's attention, and the ball goes quick to the corner (although it could have been much faster without Weems' last dribble) where Jackson beats the defender's close out. He has a good option to finish or to kick the pass out for a wide open shot. 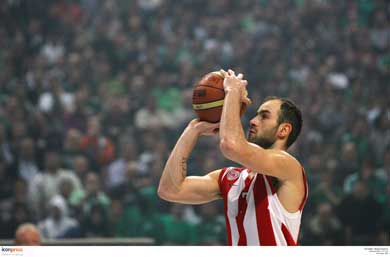 Last week I received an e-mail from a coach asking me about mismatch defense (big against small in the perimeter) We exchanged our thoughts (and we are still doing it) and I was willing to find some examples of mismatch situations to show my ideas. And yesterday we saw a nice one involving Vassilis Spanoulis and Nemanja Bjelica.

There are many different ways to defend a mismatch, and I'm not going to criticize how Fenerbahçe did it last night, you know it is said that "after the battle everyone is a good general" but this one works well to explain myself.

I said my colleague that the first rule I give my players is to force the ball handler to drive to the basket, to put a lot of pressure on the ball. For different reasons:
In the video, Bjelica (huge wingspan) is ready to contest the shot (or he thinks he is) but you will notice how the other four defenders are also focused on Spanoulis. If he tries to drive, he won't be able to finish at the basket, and as you see, when he really starts being aggressive there are nine seconds remaining on the shotclock.

Let's take a look at the video:

Update: Coach Ali Kamalian told me about this article: mismatch in the NBA, with a different focus. The tendency there (just like in other situations) appears to be to allow the mid range shots instead of "forcing" to drive. 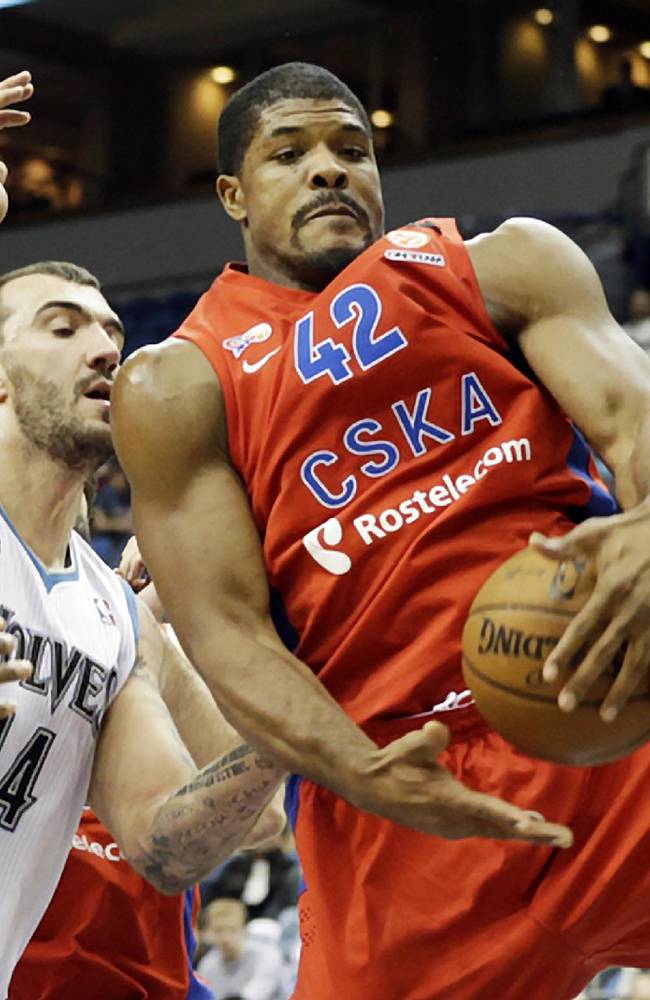 Kyle Hines is becoming a regular around here... Today I want to show you how a big guy can be really good at shot creation. We don't call a PF / C a "playmaker" very often, but CSKA's player is a really good one.

Hines is known for his energetic style on the court. He should be recognized, too, for his game knowledge and space awareness.

Here you can see how, in the last quarter of the CSKA - F.C. Barcelona game, he rolls after setting a ball screen, to receive the pass and find the wide open teammate. It is said that the "x" marks the spot. And there goes Hines again and again. Even in the second clip when the defender touches the ball and is close to steal it, he keeps calm and delivers the pass for the easy three.

Of course, let's not forget about the great spacing shown by the Russian team, which makes much harder for the defense to stop the offense.

Here is the video:

"Don't tell me you want to play Defense, show me!" Does it sound familiar? 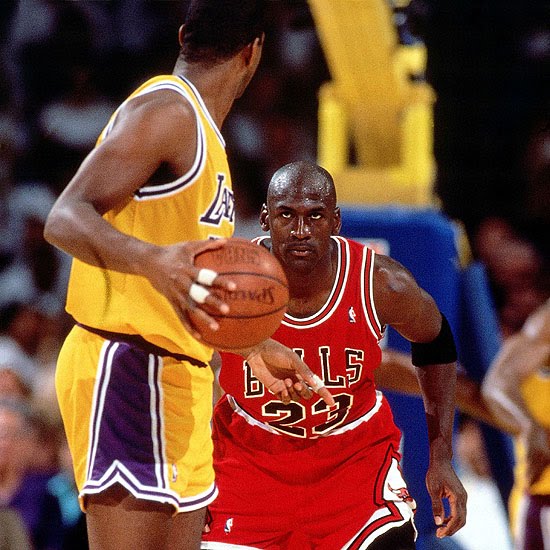 I believe you can get better at playing defense through the "defensive fundamentals" improvement. Using the right technique, practicing your defensive skills and learning how to read the offense…

Very often we, coaches, "forget" about this, and use the players lack of desire to justify a bad performance (sometimes it happens, but not as often as we hear or read) It's not 90% will and 10% skills, that's poetic, but not true. In any case, if we want to talk about percentages, let's go with 100% will and 100% practice, in order to play the best defense you can.

This week I saw some nice examples of good defensive efforts, understanding them as will + practice. Here are three of those: two big guys, Ratko Varda from Mega Vizura and Serhiy Lishchuk from Valencia Basket, and one small, Sergi Llull from Real Madrid.

Varda stops a penetration and then, with quick footwork and realizing about his position on the court, slides and gets the position right outside of the semi - circle to force an offensive foul.

Lishchuk jumps to stop the ball defending a pick and roll situation and sprints to recover his man (blocking his shot, with very good timing)

Llull sees how his teammate loses his man and rotates to stop the penetration and the one on one. Slide, sprint, balance.

Let's take a look at the video:

When switching on ball screen defense, one of the most frequently used moves once the offense finds the big - small mismatch, is to double team. We saw plenty of it last weekend in the game between Obradoiro and F.C. Barcelona. The home team did a great job to stop Barcelona's offense and played hard and smart on both ends of the court to win a tough game.


Today I want to show you one possible way to beat a double team situation. Barcelona is one of the best teams when we talk about strategy and game preparation, and here they find a nice answer to score.

Side screen, the defenders switch. The offense finds the pass inside. Mismatch. 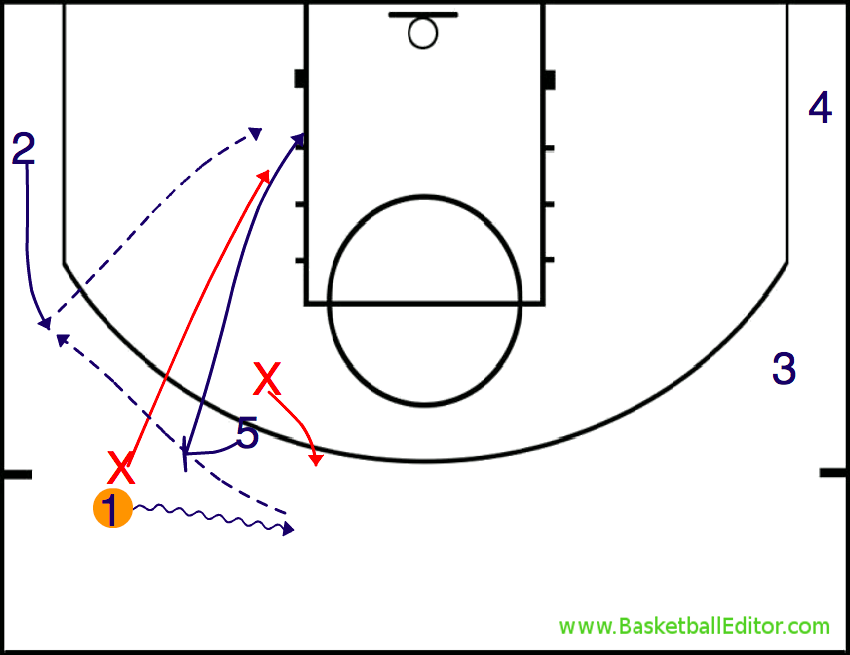 Help side is ready to double team. "X3" will play "goalkeeper" against the two players on his side. Avoiding easy skip passes, and ready to rotate if the offense swings the ball. 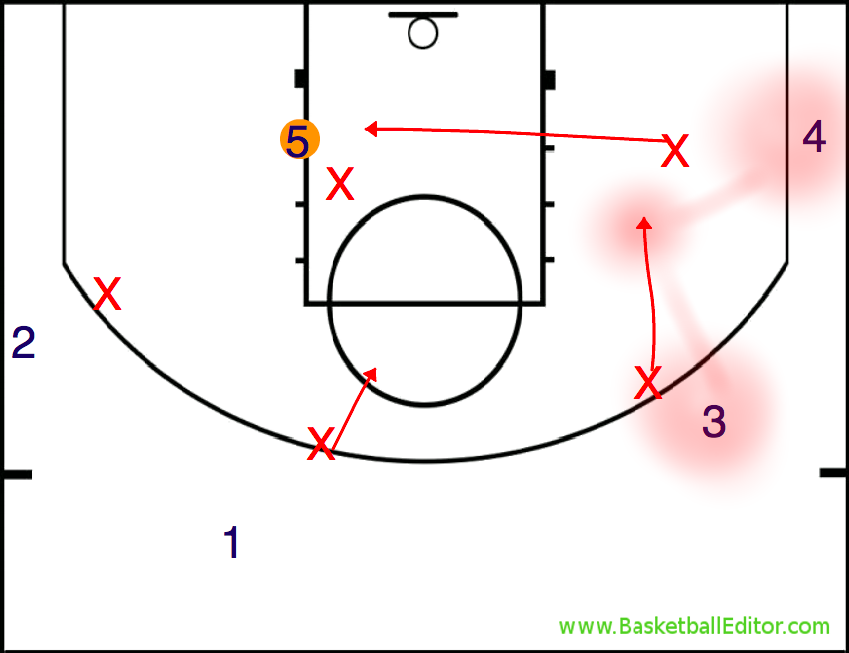 But then, "3" - Papanikolaou, cuts to the rim forcing the defender to follow him or else he can easily receive and finish without opposition. Here comes the ball reversal and the easy shot for Nachbar. 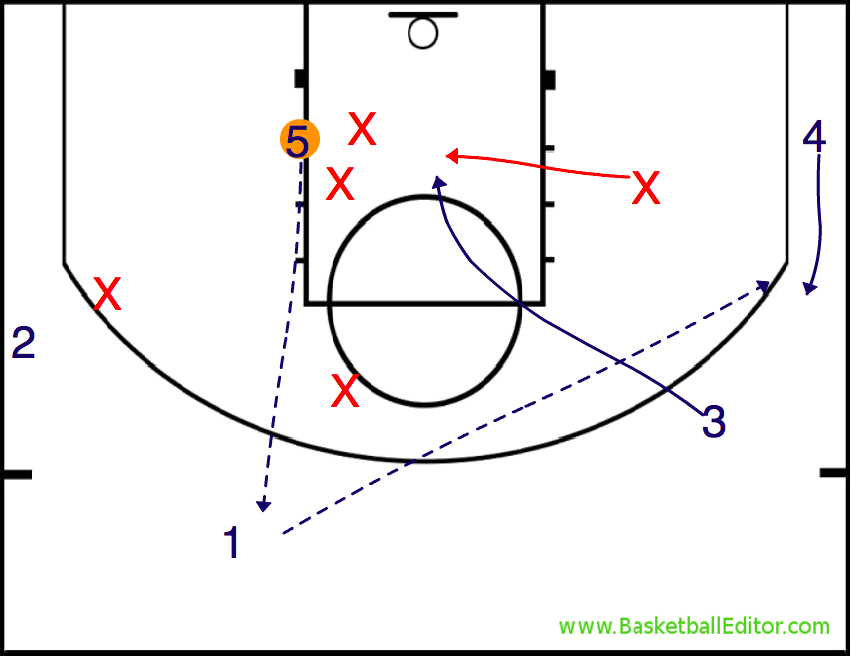 Let's check it on the video: 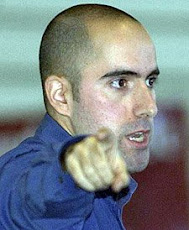